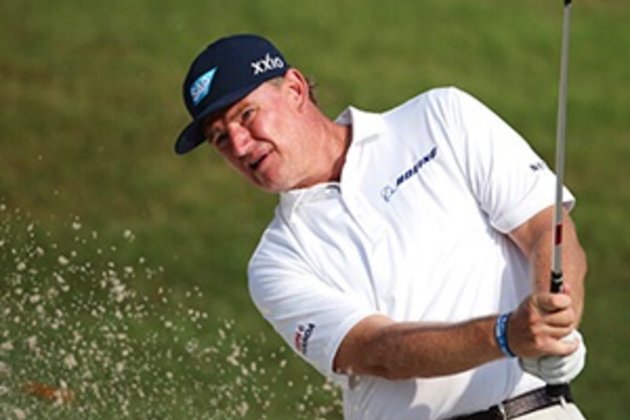 Els in the hunt for Maybank Championship title

Kuala Lumpur - South African Ernie Els surged into contention at the halfway stage of the Maybank Championship on Friday after he posted a 70 to sit two shots behind leader Thomas Pieters.

But it was Els who got the crowd's attention at the Saujana Golf and Country Club in Kuala Lumpur with a consistent display under sweltering conditions to sit tied fourth at six-under par 138.

Els, a four-time Major winner, was happy with his position despite the testy conditions.

"It is quite difficult because the winds are swirling a bit. But I happy with my game. Hopefully it's not too far away tomorrow," he told reporters.

"Even if you are three or four shots by Sunday, you have a chance so I am looking forward," Els added.

Pieters, who started the day in sixth, finished with a three-under par 69 for the slim advantage courtesy of four birdies.

Despite the lead, big-hitting Pieters said it was not his best day.

"I struggled off the tee early on, at the end it was a lot better. It didn't feel like a good day to me, I made the best of what I had," he said.

Indonesian underdog Masrin, ranked 1 000 on the world rankings, refused to get carried away despite finishing the day with a 68.

"I don't want to think too much about the scale of the event. I was able to stay focused and my game plan and I did that well."

American David Lipsky also put himself in the running by ending on tied fourth alongside compatriot Paul Peterson.

Malaysian favourite Gavin Green did well to make the cut after he finished tied-55.

The $3 million event is co-sanctioned by the Asian and European tours.

Leading second-round scores on Friday from the Maybank Championship in Kuala Lumpur (par 72):