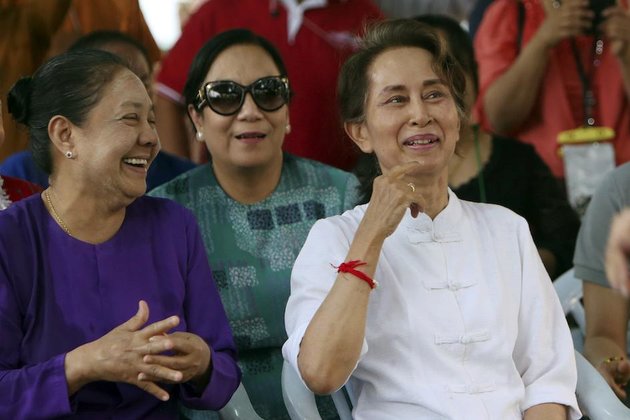 Myanmar: Satire is Not a Crime

(New York) - Myanmar authorities should drop charges against four performers for criticizing the military in a satirical thangyat performance, Human Rights Watch said today. Thangyat is a form of slam poetry traditionally performed during Myanmar's April New Year holiday that has long been a vehicle for humorous criticism of everything from politics to social behavior.

On April 15, 2019, police arrested four members of the Peacock Generation Thangyat troupe in Yangon after they live-streamed their act on Facebook. Zayar Lwin, Pang Ye Thu, Paing Phyo Min, and Su Yadanar Myint were released after being charged with violating section 66(d) of the Telecommunications Law, which has been repeatedly used against those criticizing the government or the military online. Su Yadanar Myint told the media that the group wore military uniforms during a performance the previous week.

"Myanmar's authorities are demonstrating once again their intolerance of criticism, even in satirical form," said Linda Lakhdhir, Asia legal adviser. "Rather than arresting their critics, the government should listen to what they have to say."

In another recent case, the authorities detained filmmaker and human rights activist, Min Htin Ko Ko Gyi, on criminal charges for a series of Facebook posts criticizing the role of the military under the country's 2008 Constitution. At a hearing on April 12, the court denied him bail even though he has liver cancer.

The current government has previously brought criminal charges for satirical criticism. In April 2018, eight students were convicted of criminal defamation for performing a satirical anti-war play, and the man who live-streamed the play was sentenced to three months in jail for violating section 66(d).

The editor of the Voice Daily was detained for two months on criminal defamation charges after the paper posted online a satirical review of a military-made movie. And the editor of the Thanintharyi Journal was fined 500,000 kyat (US$330) in February for a satirical article that was alleged to damage the reputation of the chief minister of the state.

The latest arrests follow a controversy over attempts by the authorities in Yangon to censor thangyat lyrics. Officials told all troupes intending to perform in Yangon to submit their lyrics for approval in advance, and there were reports that officials pressured local venues not to host those who did not do so. A spokesman for the ruling National League for Democracy (NLD) claimed that the curbs on thangyat were "temporary" measures as Myanmar moves toward democracy. Some troupes refused to submit to censorship and performed on the street instead.

The United Nations Human Rights Committee, in its general comment on the right to freedom of expression, stated that the "mere fact that forms of expression are considered to be insulting to a public figure is not sufficient to justify the imposition of penalties." Thus, "all public figures, including those exercising the highest political authority such as heads of state and government, are legitimately subject to criticism and political opposition."

"By censoring satire and arresting those who refuse to be censored, Myanmar's government is showing utter disregard for free expression," Lakhdhir said. "Charges against satirists, whether poets or writers, should be dropped and the government should promptly amend or repeal all laws that criminalize peaceful criticism."